Asdfmovie10 is the tenth installment to the asdfmovie series. It was released on April Fools' Day 2017.

(Guy 1 is the top of a building, strong winds)

(Man 1 takes off a piece of his torso)

Snake Arms Girl: Heeey... I'm not like other girls. I have SNAKE ARMS.

Jim: No, please! (Zooms out, and Jim is revealed to be a balloon)

Near Boy: (points away) Is this you?

*both are hit by a train*

Kid: I wish I could fly!

Kid: Yaaay! (Jumps up and hits the ceiling + splat)

Guy 1: You know what I hate? Child murderers.

Happy Father: My beautiful baby! This is the happiest day of my Life!

Lady: ♪ If you're happy and you know it, clap your hands! ♪

(two women appear, one opens her mouth real wide and someone is inside of there)

Fat Guy: I don't wanna be fat anymore... (pulls up a gun while crying, eats the gun)

TomSka: Hey you! if you like asdfmovie you should probably buy an asdfmovie T-Shirt! I promise I won't spend your money on food! Nah, I'm totally gonna spend it on food. 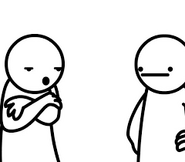 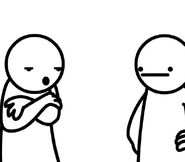 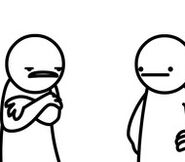 Add a photo to this gallery

Retrieved from "https://asdfmovie.fandom.com/wiki/Asdfmovie10?oldid=28362"
Community content is available under CC-BY-SA unless otherwise noted.