Muffin Time is an upcoming asdfmovie card game, created by TomSka and Big Potato Games. The game was funded by Kickstarter and will be released by July 2020. It was revealed in the TomSka video, "IT'S MUFFIN TIME".

Each player starts off with three random cards from a deck, during a player's turn, they can take a new card from the deck or play their cards. There are three different types of cards: Action, Trap, and Counter cards. Action cards have a variety of effects such as benefiting a player, screwing over a player, or have a random effect. Trap cards are placed face-down which another player can flip over, read it out, and negatively affect them, they can be used once per turn, don't count to the total of cards a player has and only three trap cards can be active at a time. Counter cards can counter another player's card and can be placed straightaway. When a player has 10 cards, he/she must shout out, "It's Muffin Time", if that player still has 10 cards during their next turn, they win. There are over 200 unique cards in the game. 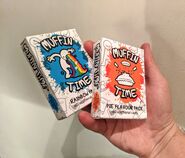 Add a photo to this gallery
Retrieved from "https://asdfmovie.fandom.com/wiki/It%27s_Muffin_Time?oldid=29302"
Community content is available under CC-BY-SA unless otherwise noted.